On Friday, New York Times China correspondent Edward Wong wrote a telling, and frankly chilling, piece about the harsh realities of living in the filth of Beijing’s air pollution.

He is right on. Beijing’s air pollution is one of the most devastating consequences of China’s growth. It is a disgusting, dirty specter that follows you around everywhere you go.Honestly, I never thought in my lifetime I’d have to worry about these things. I moved to Beijing in July 2011, and did not think too much about the pollution until one January morning this year when I looked out my window to find that it looked like I was living in Mordor. I later found out that the air was measured at almost 4 times over what is considered “hazardous.”

After January’s “Airpocalypse,” I consulted a physician that keeps a health blog in Beijing, Myhealthbeijing.com, and here is what he had to say: 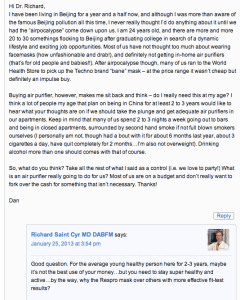 As a young American, then, it seems to make sense that the health risks that I face living in the filth of Beijing’s air is not nearly as numerous as for young kids or babies and older people. For me, though, the effects are still deep. As Wong alludes to in his op ed, it really comes down to how the air really enslaves one’s mind as much as one’s body. If I develop lung cancer sometime down the road, will I be able to attribute it directly to the years I spent in Beijing? Probably not. More than just the physical health risks posed by the air pollution is the damage to my overall quality of life and the general way I think and feel every day living in filth and ugliness.

I love the beauty of God’s creation. And I hate that most days, the smog hides all of that. Even though I know that it really doesn’t make much of a difference, I still will put on my “bane-mask” air filtration device to even feel comfortable riding my bike outside. That is not freedom. The air has allowed a little devil to crawl into my head, reminding me everyday of the cloud of carcinogens that is all around me. 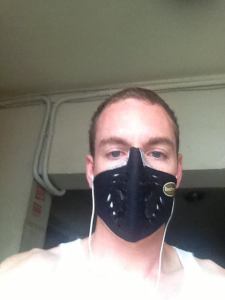 They say that what doesn’t kill you makes you stronger. For me, Beijing’s air pollution just grows my appreciation for the home that I love the most, Pure Michigan.

I returned to Michigan last week to spend some time with my family as my grandparents celebrate their 60th wedding anniversary. Sitting here, looking out over the waters of Lake Michigan in South Haven, I’m reminded of the juxtaposition between my two homes that now defines my life. I can’t count how many times over the past few days that  I’ve consciously thought to myself  “wow, this air is so clean!” or “these flowers smell SOO great!”

Still, for now its merely temporary. Soon, I’ll head back to my home in Beijing where I struggle with the daily decision to either ignore the reality of the black air that surrounds me, or take active steps to manage my life in the interest of my long term health.

At least I know that when I finally decide my journey in China is over, I’ll walk down the road that I’ve been on all the while. The road that leads to God’s country, a place where the beaches are clean and the air is fresh.

The road back to #puremichigan.