And who does football better than the Big Ten? When the Big Ten Clubs got wind of this a few weeks ago, we were armed and ready to do what we do best: TAILGATE! It is really amazing what happens when a few people have an idea and just decide to run with it. Within 2 weeks, a group that included myself (President, MSU Beijing Alumni Club), Marco Reyes (President, U Illinois Beijing Alumni Club), Sylvia Liu (Purdue Beijing), and Tom Degregoris (Notre Dame Beijing) got together with the AFL China team to sell almost 250 tickets to the game through the Big Ten Network. Then in the morning before the game, we hosted the first ever American Football Tailgate in Beijing. Over 100 people representing 20 universities came out for beer, sausages, and all the fixins of an America-style football tailgate. We believe it is the start of a great new tradition!!

See below for pics from the event, and join our Facebook page here: https://www.facebook.com/groups/bigtenchina/ 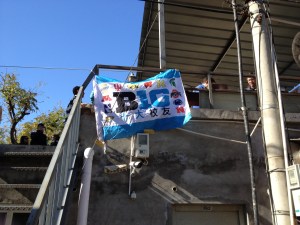 As it is every day, it is GREAT to be a SPARTAN.

I am so proud of my friend, colleague, and professor, Dr. Geri Zeldes of Michigan State University for producing and directing a great documentary about the experience of Chinese students at MSU, Imported from China. The documentary featured the journey of a few Chinese students at MSU, along with American students that reflect on their interactions with the influx of Chinese in our community. It premiered at MSU on September 17th, and will soon be distributed widely. I believe it will be a great tool for any university or school that is experiencing an influx of Chinese students and is looking to serve them better.

I am honored to have been interviewed and included in the documentary, along with some of my other respected and dear friends, including Jing Cui, Tom Watkins, Peter Briggs, and Joy Fu.

MSU is currently home to over 3,600 Chinese students. This puts our university at the heart and center of one of the world’s most dynamic and unfolding stories – the one between China and the U.S. As the documentary says, “Like it or Not, we are linked together.” At MSU, we are creating leaders of a generation that I believe will guide us through a prosperous and fulfilling modern U.S. – China relationship.

If you are interested in screening this video at your school or for your alumni club, please contact me and I can put you in touch with Geri.

One of the most unexpected joys of my time in Beijing actually has its roots in something closer to home than you’d think. While I am always of a mind that Spartans everywhere are changing the world, I am equally inspired by the work I see every day being done by Big Ten Alumni here in Beijing.

Since early in 2012, the Big Ten Alumni Clubs of Beijing has emerged as a dynamic group of individuals that are lighting this city on fire. As I mentioned in a previous post, til now we have hosted the 1st and 2nd annual Big Ten alumni Mixers, both bringing in alumni from around this city.

This year we tried something different: The Big Ten Fourth of July Weekend Bash in Ritan Park. It is always amazing to me the different kinds of people that you meet that come from so many different backgrounds that show up when hosting these types of things. We even had one MSU alum that took a flight in from the city of Changchun, which is is somewhat like going from Georgia to Michigan, just to be at our party! #Spartanswill

We also had an endorsement from the Deputy Chief of Mission of the U.S. Embassy in Beijing, Dr. Robert Wang, for the event. Dr. Wang received his PhD from Iowa so is a fellow Big Tenner! Check out the video here: http://www.youtube.com/watch?v=qEn_WXz8RN4

It was a great success, with over 200 alumni from around Beijing coming out to celebrate this great occasion, including members of most of the Big Ten schools. And to be honest, I was impressed especially by the turnout from the University of Wisconsin…looks like there is another dynamic club in the making.

We’ve made some great progress for the Big Ten Conference here in China and the MSU Beijing Alumni Club looks forward to collaborating on future events and initiatives.

Since the beginning of 2012, I began taking an active role in the “Alumni Clubs of Beijing”(ACB). This group is a consortium of clubs representing over 60 universities, mostly in the United States but also including a few in the U.K. and China, that are organized here in Beijing. The mission of the group is to: “Provide a platform to strengthen and offer resources for Beijing’s university alumni clubs, such as sharing best practices and enabling cooperation for larger scale events. Together we can tackle the challenges that no one individual club is equipped to handle on its own.”

As the President of the MSU Beijing Alumni Club, I am not only responsible for organizing and hosting events to bring together Spartans here in Beijing. I want to make sure that MSU’s presence and the “banner of Sparty” is heard and felt throughout Beijing and China. I became involved in “ACB” because I saw it as an opportunity for the MSU club and for the university to make itself known in Beijing among others that share their passion for their university.

Moreover, it is also an enormous resource I can share with our club members that are looking for a job, a project, or anything to “get their feet wet” here. Beijing is indeed one of the world’s most important cities; it is also one of the largest, and thus easy to get lost. ACB is a tool that can be used to really take advantage of “six degrees of separation” to move more efficiently.

I am proud to say that among the crowd of universities involved, MSU has really been recognized as one of the most active, successful clubs. We have now co-hosted a first and second annual “Big Ten Pre-Alumni Ball” Mixer, in 2012 and 2013, respectively, each year bringing around 200 folks out for networking and fun.

This year, MSU once again participated in ACB’s signature event, the  2nd annual “Alumni Clubs of Beijing Ball.” As you can see from the picture, MSU was well represented by a group of top notch Spartans. We sure do look good, eh?

As my friend, Scott Westerman, Director of the MSU Alumni Association always likes to say, there are Spartans everywhere. Here in Beijing, we are uncovering a gold mine.