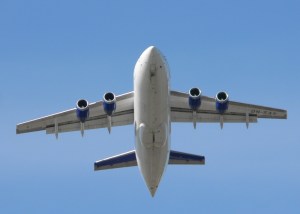 The word is out: Chinese tourists are coming for you! Over the last decade, outbound trips from China have increased substantially. In 2014, Chinese tourists made over 67.5 million trips abroad. We should expect these trends to only increase as China’s wealthy have by now already developed a strong need to explore new places to sightsee and park their cash. Here are three trends for you to be aware of to stay ahead of the “China Tourism Wave.”

According to a report by Oxford Economic and International Hotels Group, 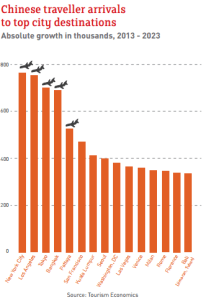 No matter where you are from, you’ve probably at one time or another encountered a large Chinese tour group: lots of Chinese in a pack taking pictures, walking around confused, with a tour guide carrying a little flag on top of a long, skinny pole.

But Chinese travelers are starting to change, move away from the pack mentality and more towards traveling with their immediate family or by themselves.

Why is this happening? In part, it is because with new wealth and education, Chinese are able to navigate trips by themselves. They no longer have to depend as much on travel agencies or group travel packages.

What’s more, Chinese travelers are often economic travelers in the sense that they really know what they want to BUY before leaving home and know where they can buy it. Chinese are largely going abroad in search of luxury goods that they cannot get at home, like jewelry, antiques, or designer clothes, or perhaps going to buy discounted tech products that are way more expensive at home. They follow big brands like Louis Vuitton and Michael Kors, and they tend to go to the biggest, best places that they can buy them.

Chinese service providers are responding to and cashing in on these trends. In terms of travel booking, travelers are now mostly going to online travel booking sites. The two that dominate the China market are Qunar.com and Ctrip.com. It is clear that more Chinese travelers are using these platforms to increase the bookings.

Domestic hospitality and airline companies are also investing significantly in building full-service platforms in foreign countries frequented by Chinese travelers. In the aviation industry, many Chinese domestic airlines like Air China and China Eastern has already started operating directed flights from multiple cities in China to a variety of cities in North America like Los Angeles, Las Vegas, New York, and Houston.

One big company to watch out for in this space is Hainan Airlines (HNA Group). HNA is a monster in the airline and hospitality industry, and they are becoming one of the biggest players in terms of providing “go-abroad” services for the Chinese traveler. They have already begun operating direct flights to Seattle, and earlier this year started a direct flight to San Jose. On the hospitality side, the company is looking to make acquisitions and joint-ventures with foreign hospitality management companies. In June, HNA acquired 15% of North America’s Red Lion Hotels Corporation, and seem poised for more.

If you’re looking to attract more Chinese tourism dollars to your business or community, it would be smart to look at partnering with some of these domestic service providers.

Next week, Governor Rick Snyder will be traveling to China on his 3rd trade mission in as many years. Here are 5 things I hope he does during his trip (heck, I’d take 2!):

Obviously, we need to see some real business deals signed that bring home jobs. There are at least 30 delegates going on the trip with Snyder, and I hope that at least one of them, such as Lori Huisman of Classic Design Concepts, can benefit from associating with the governor on this junket with a real business deal.

2. Declare that “密西根”is the standard Chinese name for the state of Michigan

It sounds crazy, but the state of Michigan does not even have a standard name in Chinese. There are at least 3 popular versions throughout China, but the state itself has never made it a point to standardize. The name 密西根 (pronounced mi-shee-gen) is the best choice and is already being implemented at the Michigan China Center in Shanghai, Michigan’s official office in China.

This will greatly help George Zimmerman, Director of Travel Michigan, and those of us Michiganders in China helping to promote our state!

Quartz.com, and many other news outlets, commented about how Chinese have been going crazy over cheap buys in the Detroit Real Estate market. According to Fox News, though, many were unable to make purchases because they were denied visas to the United States. Ouch!

If the Governor signs an invitation letter, that goes a long way for a foreigner to get an approved visa. We could greatly avoid the missed opportunities created when serious buyers are denied entry. (Note: I understand that we don’t want the corrupt or the criminal entering either…proper due diligence on invitees would have to be a prerequisite.)

4. Pen a Sister City Memorandum of Understanding between Detroit and Chongqing

With almost 30 million people, Chongqing is China’s largest city. Lucky for Detroit, it is already sister cities with this giant! Snyder should re-ignite the sister city relationship by signing an MOU with their new party chief  to work towards sustained collaboration. (Ironically, the Party Chief of Chongqing was sacked last year in a corruption scandal and recently went on trial…I guess you could say there are some similarities between the two cities?).

There are thousands of Michiganders and Chinese with Michigan ties that are ready to serve on the front lines to change the narrative about Michigan in China. We have access to corporate CEOs and government officials that we’ve worked with during our time here – – commission us to start a “Detroit Dialogues” series to get people talking about the realities of Detroit and Michigan. Consider this my application to volunteer!

Good luck to Governor Snyder and this year’s trade mission! 中国欢迎您！Welcome to China!

Detroit’s announcement of chapter 9 bankruptcy was a difficult but essential step for the city’s resurgence. Now, more than ever, what Detroit needs is belief. Detroiters have to believe that the city will come back; and if new people are going to be attracted to become residents, they’ll have to believe that Detroit is safe, exciting, and profitable.

This type of belief only comes from raising and executing bold ideas. Here’s one: invite China to be a key partner in the revitalization of Detroit. What better statement could be made than to have a city like Detroit, for years mired by resentment of a China that is “stealing our jobs,” finally grow up to strategically engage the world’s second largest economy?

The Washington Post recently published an article outlining six crazy ideas for rebuilding Detroit, so I thought I’d add a twist to that. Below, I propose a six-pronged approach to building the “China Engagement Strategy to Help Rebuild Detroit.” It is a long-term vision, which needs to start with getting people face-to-face, building trust, and ultimately result in real investment and jobs coming into Detroit from this unlikely partner.

Unsurprisingly, Chinese people largely associate the city with the blight, unemployment, and violence that they see on TV. The only way to bring in investment is to get actual people into the city. Investing in a “Pure Michigan in Chinese campaign” will allow Michigan and Detroit to cash in on the growing number of Chinese tourists using their expendable cash to tour America and hopefully change their perception through a direct exchange.

2. Build a strong Sister City Relationship between Detroit and Chongqing

People-to-people exchange needs to increase to build trust. A great platform for this would be bolstering the Sister City relationship between Detroit and Chongqing, which happens to be one of the world’s fastest growing cities

Governor Snyder seems to be ahead of the game on this one as he is planning a stop in Chongqing on his upcoming trade mission. May I suggest he kindly ask Chongqing to write a check to fund a vibrant sister cities program with Detroit?

Between the University of Michigan and Michigan State University alone there are currently over 5,700 Chinese students going to school in Michigan. While they are pumping in millions of dollars in revenue to the state every year through tuition and fees, that just tips the iceberg. Most of these students would be dying to get job experience during their time in Michigan, even if that required living in Detroit for the summer. These students have the power to change the narrative.

4. Get the EB5 program working in Detroit

Developers around the country have been using the EB5 immigration investment program since 1992 to fund job-creating businesses. Though there are six approved regional centers in Michigan, all with jurisdiction in Detroit, so far, there has not been a successful EB5 case in Detroit, or even in the state of Michigan for that matter. In 2012, over 80% of the visas issued to foreigners thru this program came from China.

Recently, the United States National Association of Realtors noted that Detroit cracked the top 5 most asked about real estate markets from Chinese buyers. Why not use the attention the city is getting now to promote the great properties that already exist? The bankruptcy could indicate to some that now would be the time to buy when prices are at rock bottom in anticipation of a climb.

China’s government is in a position to make outward investment. They have the world’s largest stockpile of foreign currency reserves, now standing at over $3.44 trillion. China is in the midst of deciding whether or not maintaining such a high number of reserves is literally getting the most bang for its buck, and is making a pivot to make overseas purchases and investments.

What might Detroit have that would be interesting to the Chinese? Of course, as an industrial and manufacturing hub, Detroit has access to infrastructure and technology patents that have continued to grow the presence of Chinese automakers in Detroit. Huge parcels of land are also available at rock bottom prices that are ripe for business development.

If we really believe that Detroit can rise up from rock bottom, it is going to take a few bold ideas like these to make this city tick again. Consider me a believer!